Back in the old days, the High Springs Opera House played host to countless itinerant vaudeville performers. They carted their trunks up the street from the rail depot, unpacked, then hopped the train again as soon as the curtain fell. Back then you could watch a silent movie in this place, or maybe quiver in your seat as Billy Sunday delivered one of his fire-and-brimstone sermons.

But upstairs in the old Opera House things haven’t changed so much. You’ll still find itinerant musicians here on the weekends, performing anything from blues to renaissance music with period instruments.

Even before the music begins, the odd collection of artifacts and memorabilia that fills the room creates a unique atmosphere. “If you can set the stage properly, people will get it before the actor even walks out,” says musician and museum curator Bill Hutchinson.

The “Theatre of Memory” combines Hutchinson’s love of music with his passion for history. His eclectic museum begins back in the 14th century — represented by porcelain dishes from the Ming Dynasty and a collection of illuminated manuscripts — and concludes with the first Macintosh computer.

Alongside WWI trench art and a substantial cache of seashells, he has collected two decades of hair-net envelopes. “Why should that be exciting? I don’t know, but some people go right to it,” he explains. Another favorite is his braille edition of Playboy magazine.

If the museum lacks an overt theme that’s because what matters is something far more personal. That 14th-century parchment, for instance, is not something he keeps under glass. He takes it out and offers it to a visitor: “Here,” he says, “Feel the texture of it.”

Hutchinson’s passion for life sprang from his confrontation with death in Vietnam. “I enlisted to be in the band, and they played this trick on me and put me in the infantry,” he says. “It was not only worse than I imagined, it was worse than I was capable of imagining.” 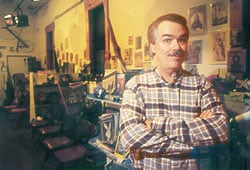 “When people are shooting at you, your philosophy goes out the window and you shoot back. That’s what I did.” Somewhere along the way he contracted malaria. Finally, he linked up with Special Services where he managed USO shows and got to play Beatles and Jimi Hendrix tunes for his fellow soldiers.

He came home deeply shaken. “I found out that there was more to life than met the eye. I wanted to figure out just what this universe is about.” When he’s not working his day job as the entertainment producer for Gainesville’s department of cultural affairs, the Theatre of Memory allows him to explore that artistic vision.

His own band (which has no name) performs an eclectic set of folk, blues and acoustic rock at least once a month. “If you use money as a yardstick, this has been a disappointment,” he says. “But if you look at art and expression, it’s been wildly successful. If it pays for itself — and if we get gas money too — it’s a good thing.”

Manic humor pervades his stage presence, but Hutchinson is philosophical at heart. “It may sound polyanish to say it, but I want to contribute to society,” he says. “I’m no longer trying to kill people. Now I’m trying to entertain them, and that’s more my natural proclivity.”