Florida’s state capital is better known for its politics and universities than for its travel destinations. But whether you’re just passing through or spending the weekend, here are some of the off-beat local attractions you don’t want to miss:

Mission San Luis is a trip back into Florida’s early colonial history. You’ll meet not only the Spanish settlers but the Native Apalachee who had a thriving culture long before the Spanish settlers arrived.  Each culture influenced the other. Mission San Luis traces that meshing of cultures. The docents you meet are all in traditional costume. There’s the Deputy Governor Jacinto Roque Pérez who typifies the politician of that era. There’s Senora Fernandez, an upper-class homemaker. The local blacksmith, Santiago, was busy at his state-of-the-art 1700s-style forge making nails for the palisades walls. Always important on a frontier, you’ll meet a few soldiers like Lieutenants Manuel and Francisco who help defend the mission. 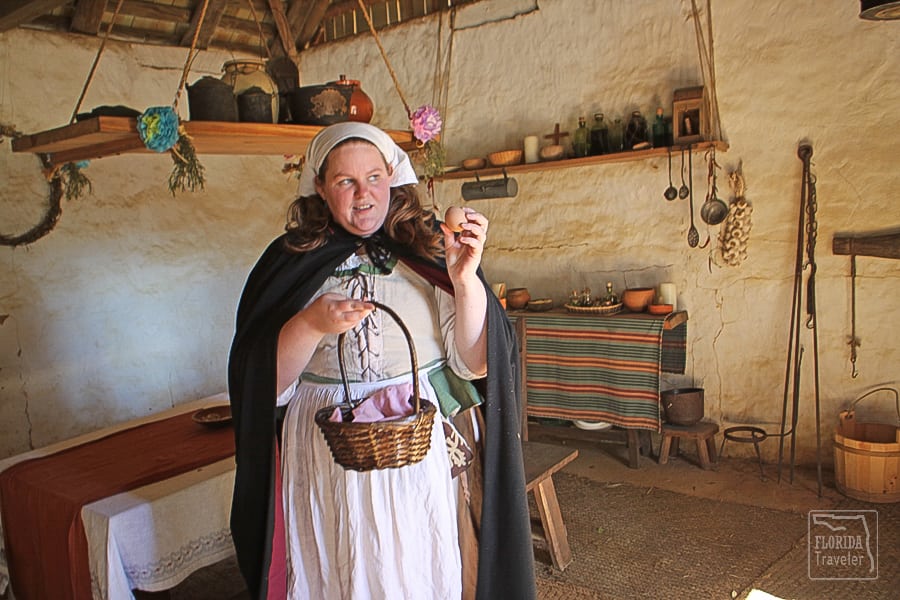 Mission San Luis’ buildings are based on continuing archaeological research. The reconstructed Apalachee Council House show that the Apalachee were sophisticated builders. The Council House is capable of holding 2,000-3,000 people and is one of the largest historic Indian structures in the southeast.  Mission San Luis, designated as a National Historic Landmark in 1960, is a fantastic window into Florida’s 300 year old past.

Tallahassee Museum is another time capsule set in a natural outdoor environment on the shores of Lake Bradford.  The Museum’s 52 acres combines the best of a zoo, living history museum, and park with a touch of art gallery thrown in for fun.

Florida’s unique wildlife is an important part of Florida. You could never shut up live panthers, alligators, and other Florida wildlife in a museum building.  Here you see them roaming in as close to their natural habitat as possible. You pass through a natural area planted with oak, longleaf pine and cypress adjacent to Lake Hiawatha. You’ll spot some birds and few turtles sunning in the lake. Be sure to check out McGowan Butterfly Garden.

There are lots of other animal residents such as river otters, bald eagles, wild turkeys, hawks, vultures, screech owls, great horned owls, wolves, skunks, and foxes, both red and gray. Their newest residents are the two young female panthers. There is another adult male panther. Did you know panthers and cougars are the only big cats that purr?

Another unusual feature for a museum is the zip lines. There are three lines: Tremendous Adventure for kids, Canopy Crossing for the intermediates, and Soaring Cypress for the really adventurous. The zip lines wind their way through the different sections of the museum.

Big Bend Farm takes you into the 1880s. On weekends you find living history demonstrations with docents in period dress. The blacksmith and his fiery forge are always popular. Or you can learn to cook on a wood stove. If you think Studebaker cars were antiques, view the old Studebaker buggy. Naturally no farm is complete without a horse, cows, pigs, sheep and geese.

The garden grows sugar cane, cotton, greens and seasonal veggies.  Some are served in the museum Café.

The Old Florida section of the Tallahassee Museum displays a red Seaboard Railroad Caboose. Railways were the lifeline of rural north Florida in the early 1920s. The railroad was how the farmer got his crops to markets.

Ever earlier plantation life is represented by Bellevue Plantation.  The original plantation home was moved here from its original location on nearby Jackson Bluff Road. Some of the out buildings are authentic looking reconstructions. Bellevue shows what life was like in an upper-middle-class southern pre-Civil War plantation. A reconstructed slave cabin shows the lifestyles of the African Americans as well as the landed gentry.

The Concord Schoolhouse, moved here from near Miccosukee, Florida, is a one-room schoolhouse used to teach former slave children until the 1970s.

Another part of African American History at the Tallahassee Museum is Bethlehem Missionary Baptist church built in 1851 and rebuilt in 1937 by the congregation with many of the original’s hand hewn timbers. It was Florida’s first regularly organized black church.

The dinosaurs are not the only art here. Their other art exhibits range from folk art to local artists doing things like Sketch Crawl where local artists sketch a variety of scenes around the museum grounds and in Tallahassee. The museum has an amphitheater and stage which features events like the Tallahassee Jazz and Blues Festival, Swamp Stomp (a singer songwriter fest ) youth choruses and even ballet.

The modern buildings include the Museum’s Discovery Center, Visitor Center, and Natural Science Building. Stop in for a meal or snack at the Trail Break Café.

Spring House was built by Frank Lloyd Wright for the Lewis family in 1954. It has the Frank Lloyd Wright trademark of never just sitting on the landscape; it is part of that landscape that seems to have magically grown there.  It looks like a boat floating on a sea of greenery.

If you are lucky, you may meet Byrd Lewis Mashburn, the daughter of the Lewis family.  She will share her life experiences growing up in Spring House. Her parents, George and Clifton Lewis, wanted a unique home where their four children could grow up with spacious grounds but they were not wealthy. Frank Lloyd Wright designed many buildings at Florida Southern University. That was where Clifton Lewis met asked Frank Lloyd Wright and asked if he would design their home.

About a year later they found the perfect setting, five acres with a bubbling spring in an unpopulated area just outside Tallahassee. Wright designed the house in 1952. It took the Lewises a few years to find a contractor willing to work such a unique house. They eventually hired Jack Culpepper as contractor.

The bedrooms and baths are located on the second floor. There is a bubble skylight flooding sunlight to the bathrooms. The bedrooms all have an open feel due to that rear glass windowed wall. The balconies that frame the rear of the home are cantilevered out over the greenery and overlook the spring.

It was put on the National Registry of Historic Homes in 1979. Spring House offers tours on the second Sunday of the month and private tours can be arranged at the website.

Begun in the 1890s close enough to downtown Tallahassee so working-class residents could make the commute easily, Smokey Hollow was home to many of Tallahassee’s African Americans families. It was a place folks felt safe and comfortable until the 1960s. The period of the Civil Right movement changed things. The powers that be looked on Black neighborhoods as a threat to their white supremacy and decided Smoky Hollow had to go. They called for “urban renewal” and leveled most of the homes there.  At time passed, city officials realized that civil rights protesters were not criminals, just citizens demanding their equal rights. So when Tallahassee opened Cascades Park in 2014 over what was practically the footprint of the Smokey Hollow, it recognized the people who had lived in this once vibrant community.

The neighborhood’s community spirit is represented with vegetable and flower gardens and fruit trees. Hopscotch games and a playground with a picnic area and pool bring to mind Black children who once played there.

Bradfordville Blues Club is one of a dying breed, an authentic juke joint way off the beaten path.  It’s worth visiting for the musical heritage it represents. The club celebrates the Blues, America’s authentic music, born in the Mississippi Delta and evolving into Jazz and Rock and Roll.

The club began in 1964 as C. C. Club after a popular baseball team called the C. C. Saints who played here.

Some of the big name musicians that have played there are Jimmy Rogers, Little Milton, Bobby Rush, James Cotton, Carey Bell, Bobby Blue Bland are on record as hired to play. Other like B. B. King, Ray Charles, Fats Domino and Chuck Berry came to play on the Chitlin’ Circuit at big name clubs in Tallahassee and after their gigs came out here to jam.

You find the club down a winding dirt road wide reminiscent of horse and buggy days. At the end of the road you reach a small, cinderblock building with a huge bonfire blazing behind it. Inside you find hand-painted tables showcasing names of the bands that played here. Musicians not represented by tables are honored with hand-painted autographed plaques on the walls. Pay your admission at the door and head for the small bar to order a beer or wine and settle in to hear great music.

As Gary Anton, who along with his wife, Kim, runs the club today describes it, “It’s all about music… It’s a good time.”