Silver Springs, FL — How long has Silver Springs been a Florida attraction? Depends on how you reckon it, but people have been coming here for a long time indeed. About 10,000 years ago, the Timucuan Indians gathered at the headwaters of the Silver River to hunt Columbian Mammoths. In the mid 1950s, the lovely and talented Jane Russel came here to star in the Howard Hughes thriller Underwater! In between there were steamboats and turpentine stills, Spanish explorers and Seminole Wars.

Although Silver Springs remains a popular tourist attraction, with Jeep jungle tours, boat rides a water park for kids, there’s lately a sadness about the place, a wistful acknowledgement that its glory days are past. Even the popular concert series here features country and rock ‘n roll acts who are mostly of the reunion-tour variety. 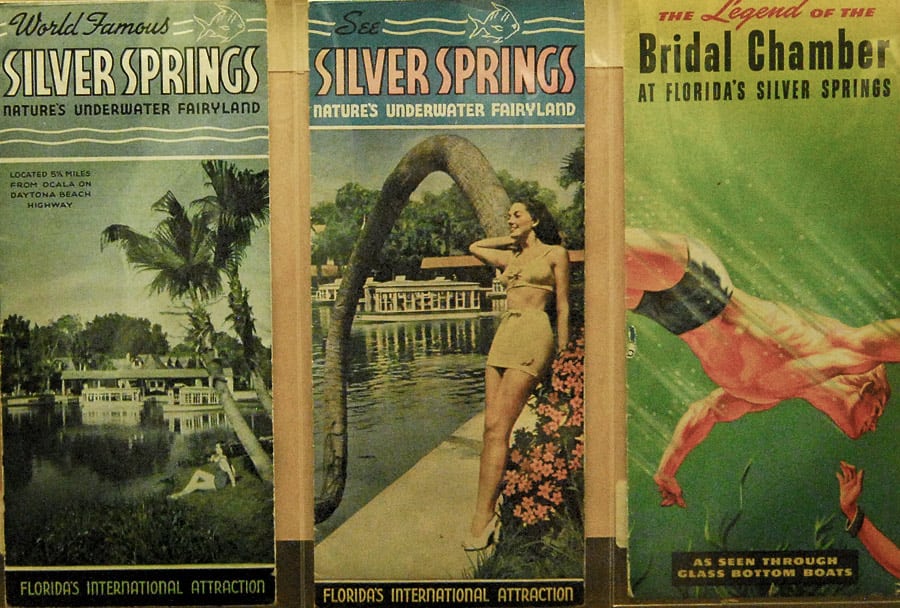 But with so much natural beauty and so much rich history, Silver Springs remains a place well worth the visit. And to dive into the history of the place, the newly revitalized Silver River Museum at Silver River State Park is just the ticket.

A Natural History of Silver Springs

A giant Columbian Mammoth towers over the first exhibits at the Silver River Museum, dramatically representing the time when Silver Springs was a hub of activity for the Paleo Indians who hunted and fished here. The mammoth was discovered at a kill site about a mile from the main spring in the 1970s. Pins and points, fish hooks and other artifacts all point to time when the main value the springs provided were simple necessities.

There are plenty of fossils on display here, but no dinosaurs since Florida was underwater during that epoch.  The first wing of the museum is devoted to natural history, and kids will get a kick out of the local wildlife displays —  especially the memorialized fight to the death between Zulu and Big George. The alligator and crocodile were once residents of the nature park, until one broke into the cage of the other late one memorable night.

The Timucuan Indians thrived at Silver Springs until the arrival of the Europeans in1513 (Ocali is a Timucuan name for a local village.) By 1760, most of the tribe had fallen victim to exotic diseases or killed. The remaining Timucuans assimilated with the Creeks from Alabama and Georgia, eventually combining with other groups to become the Seminoles.

One of the museum’s treasures is a bronze Spanish mission bell that dates to the mid 1600s, when three Franciscan missions were located in the area before being abandoned in a Timucuan uprising. The bell was part of the San Luis de Ocali mission and was recovered from the Ocklawaha River in the 1960s.

The region saw more bloodshed during the Seminole Wars from 1835-1842, the bloodiest and costliest Indian war in American history. Numerous artifacts from local forts, including Fort King, are on display, along with a howitzer from Dickison’s cavalry unit which saw action during the Civil War at the nearby Marshall Plantation.

When the Civil War ended, veterans returned to start life over again. Orange groves were established. The lumber industry  blossomed, making business out of the cypress stands in the swamplands along the Ocklawaha. But a tour of the homestead artifacts from the Reconstruction period paint a picture of a hard life. A period village has been recreated on the grounds of the Silver River State Park, and each November it comes to life with re-enactors during  Ocali Country Days.

The first genuine tourists came to Silver Springs by paddle boat in the 1850s, starting their journey in Palatka on the St. Johns River and then snaking their way up the winding Ocklawaha River to the Silver River and finally Silver Springs.

“What the Pyramids are to Egypt, so are the ROMANTIC, MYSTERIOUS, MIRROR WATERS of the Ocklawaha River and Silver Springs to Florida,” boasted one advertisement of the period. In fact, “going to Florida without visiting the Ocklawaha would be like visiting Egypt without seeing the Pyramids.”

During the Civil War, Hubbard Hart, a native of Vermont  turned his paddle boat enterprise from tourist expeditions to supplying sugar cane and oranges for Confederate troops. Replicas of his boats, along with “The Marion,” a 78-foot boat run by Henry Gray are on display.

Visitors of the day didn’t merely settle for lush scenery, delicious oranges or the sight of exotic wildlife  —  they also shot at the animals from the decks as they passed by and tossed their empty beer bottles overboard. (In time, their litter has transformed itself into historical artifacts.) An $18 ticket for three first-class passengers cost $18 with meals provided.

When railroads arrived in the 1880s, the era of the steamboats began its decline, and by the 1920s the paddle boats had gone silent. But tourism continued to flourish.

Early visitors to the spring got a glimpse of the wonders beneath the surface by peering through a bucket with a glass bottom. In the late 1800s, entrepreneurs borrowed a design used at California’s Catalina Island and began giving tours in glass-bottom boats. Between the 1920s and 1960s a Seminole Village near the present-day attraction drew the tourists from around the nation to see the famous tribe, who had commercialized their native lifestyle as a source of income.

For years the park was world renowned for Ross Allen’s Reptile Institute, with its world-renowned herpetologist and sometimes co-host with Marlin Perkins. Allen’s snake bite boots, his trademark safari jacket, a few tins of canned rattlesnake meat — even a plaster cast of his thumb! — all highlight the region’s most colorful period. These were the days when the souvenir stand was stocked with snake bit kits and lizard skins, as well as the shellacked alligator heads that are still probably the most common tourist trinkets sold in Florida.

Those days are also memorialized by Hollywood, which has used the crystal-clear Silver Springs as an underwater location for nearly a hundred years, beginning with the Seven Swans which was filmed here in 1916. The park served as the set for several Tarzan films starring Johnny Weissmuller. Other movie credits include The Creature from the Black Lagoon and The Yearling. James Bond has been a frequent visitor, and portions of Thunderball, Moonraker and Never Say Never Again were all filmed here.

The movie days are will represented in the museum. Much in that period owes a debt of gratitude to Ocala photographer Bruce Mozert, whose ingenious underwater camera housing (on display) was a great leap forward in underwater photography.