Worn out the numbers on your credit cards? Looking for a restful break in your vacation? Here are 6 day trips within two-hour’s drive of Orlando that won’t break your pocket book. And as a bonus, these will give the kids a glimpse of a Florida they won’t find at the theme parks:

Long before Disney World, tourists flocked to Florida’s natural attractions. Chief among them was Silver Springs with its fascinating glass bottom boat tours and live alligator wrestling. The park has changed hands several times in recent history and (like the nostalgic country and pop stars who headline its concert series) the attraction is showing its age. Forget the attraction for a day and try the Silver River State Park instead. The small but newly expanded Silver River Museum offers a glimpse into local natural history as well as the area’s colorful tourism. Camping, mountain biking and hiking trails in the scrub forest are all options. But for an unforgettable glimpse of one of Florida’s natural wonders, bring some kayaks and paddle up to the headwaters where you’ll share the spring with glass bottom boats and some astonishing underwater scenery.

UPDATE: Silver Springs has changed hands again and is now a state park offering kayaking and other eco-friendly activities.

How about getting school credit for a great Florida adventure? Marjorie Rawlings’ classic novel “The Yearling” brought Florida’s “Big Scrub” to life with the story of a boy growing up with a young deer for a pet in the 1930s. The real-life setting for the novel was Pat’s Island in the Ocala National Forest. Remnants of the mid 19th century pioneer settlement can still be seen along the Rawlings Trail in the Juniper Prairie Wilderness. The 6-mile round-trip hike travels through a landscape of scrub forest that surround “islands” of longleaf pine. The settlers here found life extremely difficult and mostly abandoned the place by the turn of the century. The trailhead at State Road 19 is just across the road from Silver Glen Springs — a refreshing way to finish off the hike in the afternoon. At the spring, you can also take a short hike on the Boils Trail to visit the site of the famous “flutter mill” scene in the book and movie. 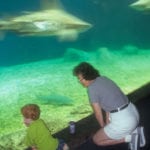 Water defines and frames the State of Florida, and the Tampa Aquarium offers an unparalleled opportunity to see the natural wonders of Florida from the inside out. Like its counterpart in Tennessee, the Tampa Aquarium walks you through the various ecosystems by beginning in the wetlands (up in the roof) and winding your way downhill around the multi-story exhibits as a single drop of water makes its way to the ocean. One of the most “kid friendly” aquariums in the country is also a fascinating journey for the whole family. At the end of the tour, you can take in an I-MAX movie or enjoy the shops and restaurants on Tampa’s Channelside.

Don’t tell the kids the name, but Honeymoon Island in Dunedin boasts of a rich Florida history and one of the state’s best beaches. The gulf barrier island has been inhabited since at least the 1500’s, by native Americans, rum runners, pirates and hog farmers. But to attract visitors as a honeymoon destination, the first thing to change would have to be the name — Hog Island. In the late 30s, an enterprising New York developer set up a few rows of thatched-roof cottages and re-christened the place Honeymoon Island. With a boost from a buddy who was an editor at Life magazine, the four miles of shoreline became a popular honeymoon destination with returning World War II veterans. The cottages and the hog farmers are gone now, but the beach here is still as white and pristine as a bridal gown. It’s an ideal place to spend the day swimming, snorkeling, fishing and shelling. There’s also a nature center, kayak rentals and a 2.5 mile nature trail.

Not all of Florida’s fascinating islands are on the coast. Hontoon Island is a 1650-acre island surrounded by the lazy St. Johns River, the longest river in the state. No vehicles are allowed on the island, which can be reached only by ferry or boat. It’s a great place to explore Florida’s wild interior. “We’ve got deer, bobcats, turkeys, gopher tortoises,” said one park official. “There’s also a variety of birds here: ospreys, anhingas, herons–both white and blue, as well as some with green bills.” Visitors may also see manatees, river otters and bald eagles. An 80-foot observation tower offers a birds’ eye view of the river and surrounding forest.

The Timucuan Indians, who inhabited the island until the 18th century, left behind many clues to understanding their culture. Two large shell mounds are the leftovers from their staple diet of snails, which they found in the shallows of river and marshes. The larger mound was once 35 feet high, but like many native shell middens it was mined to be used in making roadbeds during the 1920s. The 5-foot owl-shaped totem discovered here in 1955 was the largest of its kind found in the lower 48 states. A replica of the 600-year-old totem is displayed in the picnic area.