JACKSONVILLE, FL — Walter Jones Park in Mandarin, on the south side of Jacksonville along the east bank of the St. Johns River, is often neglected by visitors. Big mistake! Sleepy mandarin has a unique history beginning before the civil war, and onward toward to the growth of metropolitan Jacksonville. The museum is located at the entrance of the park and the best place to begin.

Mandarin was settled in the 1830s and got its name from the mandarin oranges that were grown here at that time. Even after Jacksonville consolidated in 1968, Mandarin still retained its unique personality. We met with Sandy Arpen, President of the Mandarin Historical Society, who was a wealth of knowledge about Mandarin. She related a lot of little-known history as she led us through the Mandarin Museum. 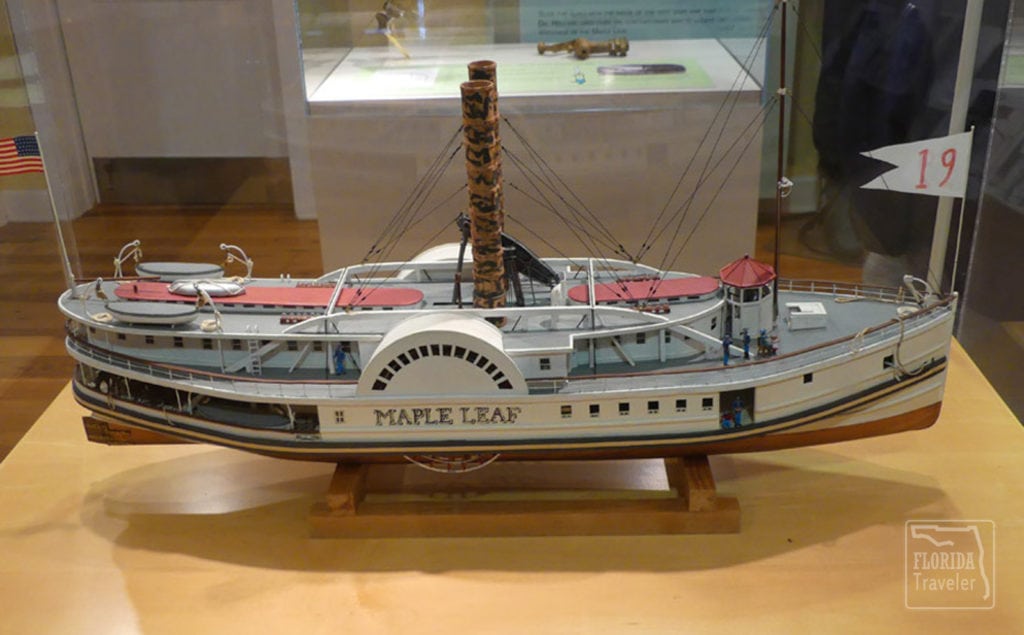 Since Mandarin is located on the Saint Johns River, much of its history revolves around the river. During the Civil War one of the big news items in Florida was the sinking of the Maple Leaf, a Union ship carrying soldiers, African American crewmen and Confederate prisoners, on April 1, 1864 at Mandarin Point in St Johns River. This was an unexpected blow to the Union forces currently occupying Jacksonville, 15 miles downriver. 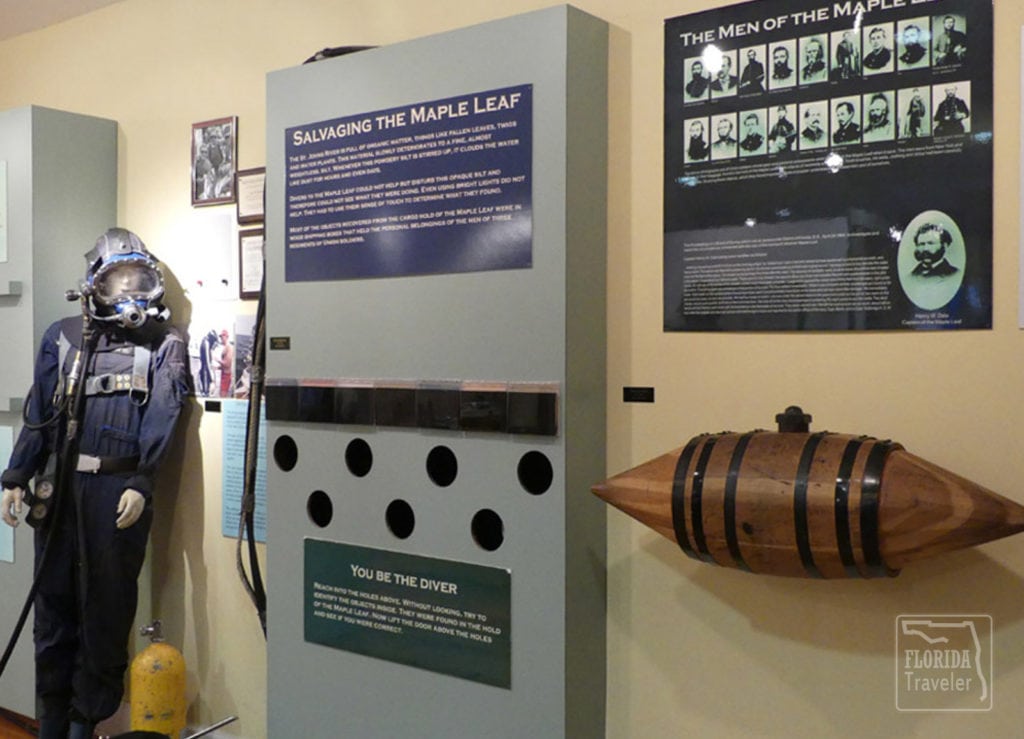 The person responsible for finding and salvaging the Maple Leaf was Jacksonville dentist and diver, Dr. Keith Holland. Historians were thrilled. Edwin C. Bearss, former Chief Historian of the United States Department of Interior, called it, “…the most important repository of Civil War artifacts ever found and probably will remain so.” Many of these artifacts are at Mandarin Museum. 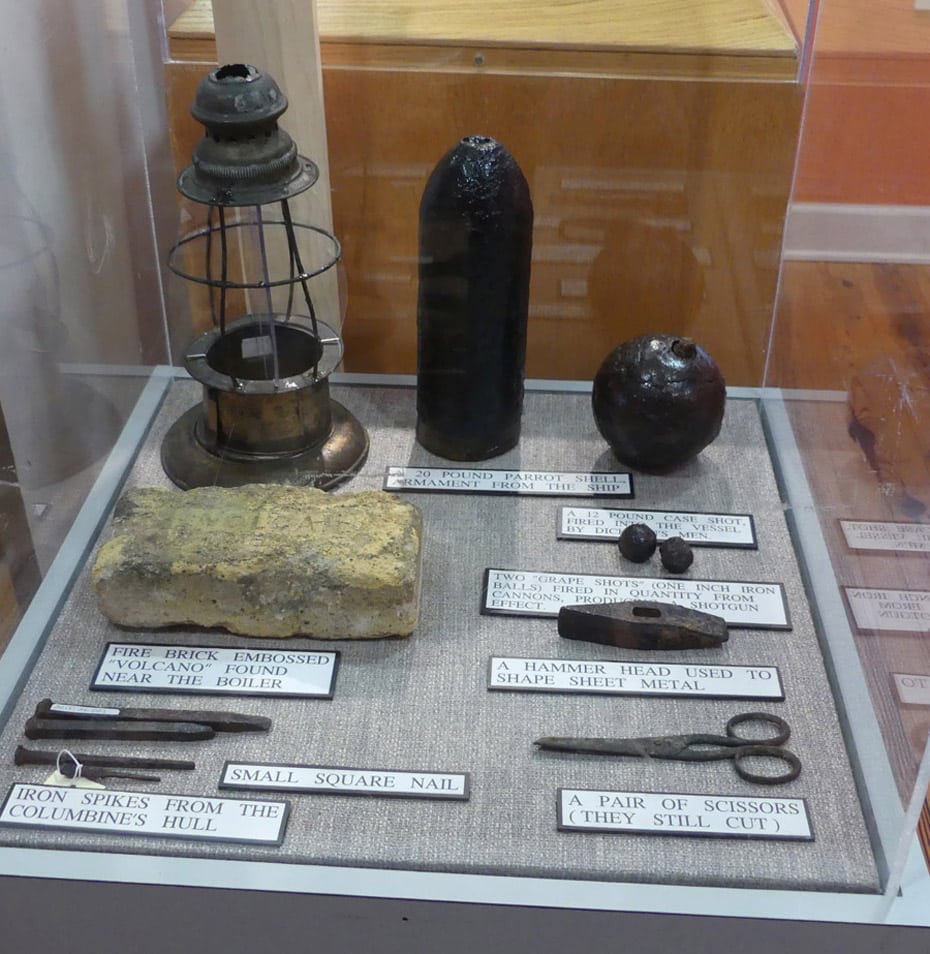 The Maple Leaf isn’t the only ship sunk in the Saint Johns during the Civil War. The Columbine, also a Union ship, made history. This was one of the few instances where a Union warship was captured by Confederate cavalry. It was later sunk in the St. Johns River just south of Jacksonville. Some of her artifacts make their home at the Mandarin Museum.

Harriett Beecher Stowe, is one of the last people you would expect to connect with Mandarin,. But there is good reason for an exhibit about Stowe. She and her husband Calvin purchased 30 acres and established a winter home where they grew oranges until 1883. Stowe wrote “Palmetto Leaves” about the Mandarin area while she lived here. A stained glass window commemorating her husband is all that remains from the local church they attended.

An exhibit recalls a different war and a local soldier, Marion Joseph Losco, who died in battle in August 1918. There are many of his personal items here. This exhibit is especially appropriate during the 100th year anniversary of WWI. A Soldier’s Story will make you realize the horrors of war. He was just 25. 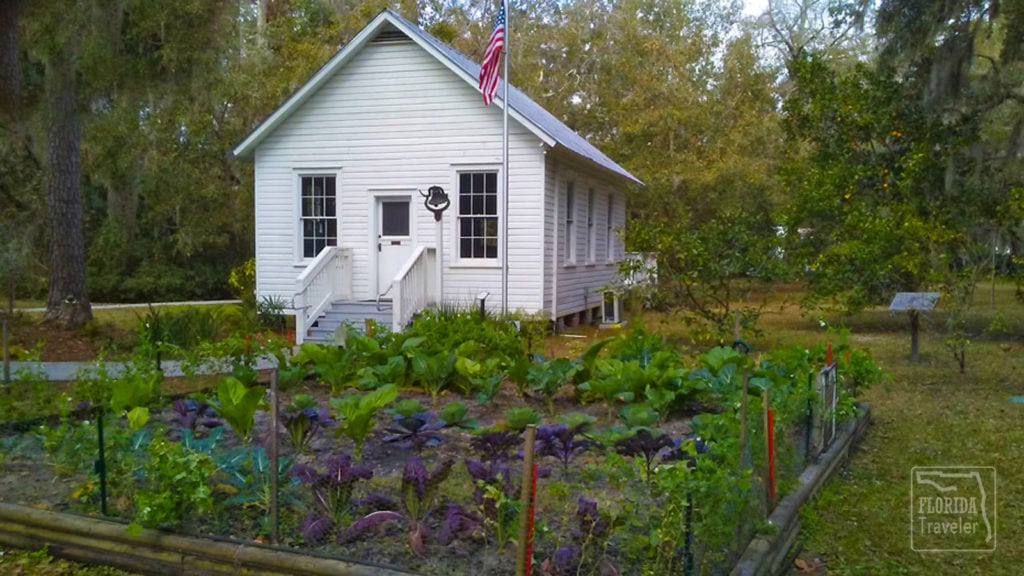 Step out the museum and visit St. Joseph’s Mission Schoolhouse for African American Children. The small white clapboard building is the only one-room schoolhouse in Jacksonville. Our docent, Gene who is also a teacher, told us about its history. 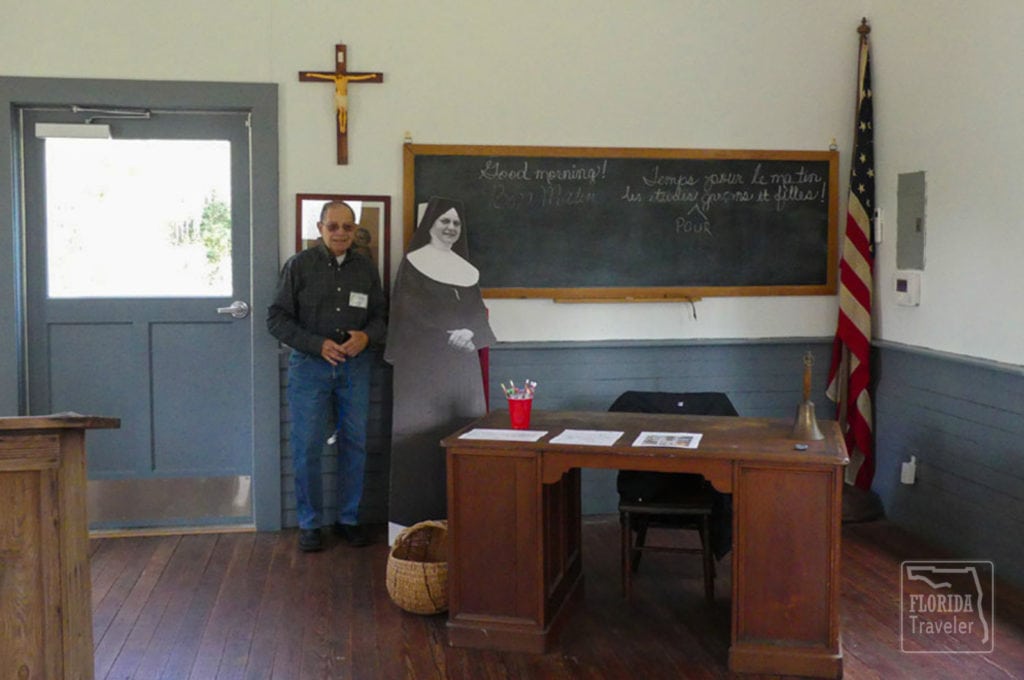 Sisters of St. Joseph originally from France but located then in St. Augustine, felt African American children weren’t being properly educated. They had the one-room schoolhouse built in 1898 to educate the children of former slaves. Inside are original teacher’s desk, benches, chalk boards and religious items. Gene “introduced” us to Sr. Julie who was the head nun at the school. The building was moved to this site in 2015. 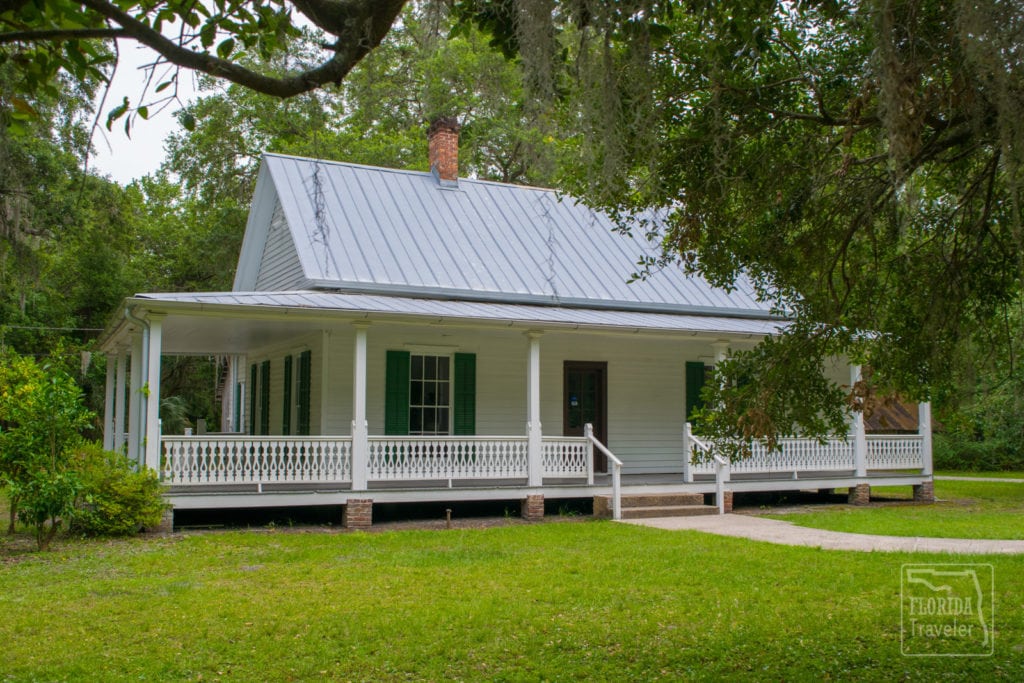 Surrounding these two museums you can step into the past in Walter Jones Park. The original owner, Major William Webb, a former Union officer, moved to Mandarin in 1875. He built the home and barn you see here. He grew oranges, potatoes, tomatoes, cucumbers, strawberries and beans to ship north so he built a dock over the St. Johns River. The present day dock is a wonderful spot to gaze out over the Saint Johns River. 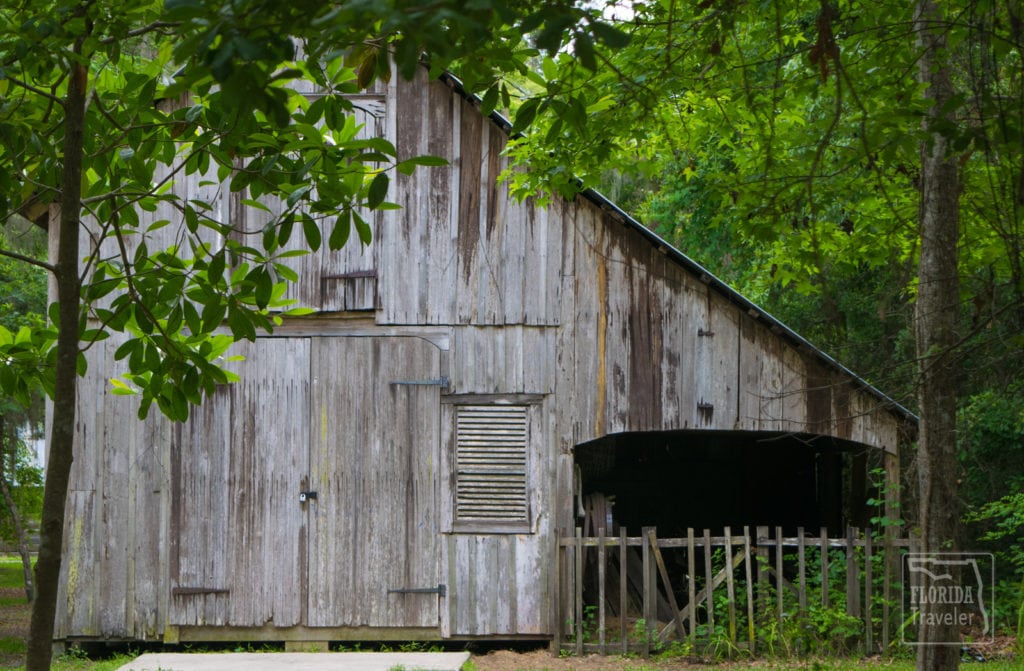 The park takes its name from a later resident, Walter Jones, who operated the Mandarin Store and Post Office. Walter Jones moved his family to the home in the early 1900s. Many of the furnishings you see in the Webb House belonged to the Jones’ family. His heirs retained ownership of the property until 1992.

Another historic building in the park is the Losco Winery which was owned by the family of Marion Joseph Losco, the young veteran that you met in the museum. 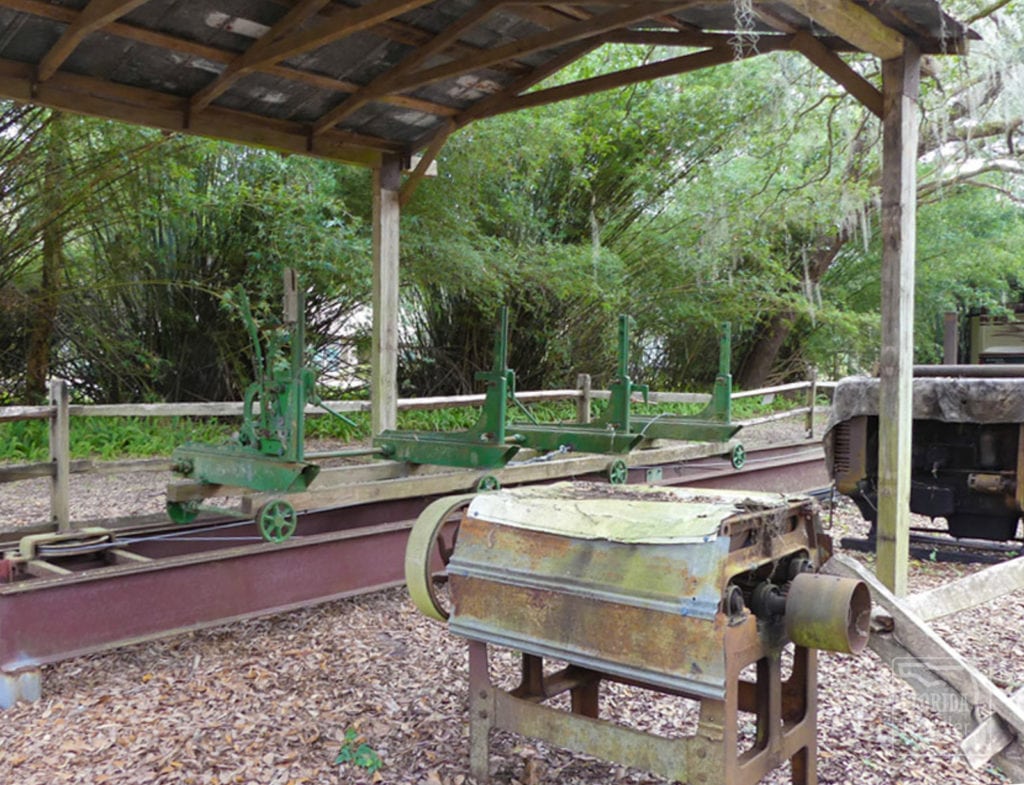 As you drive around Mandarin you see moss-draped live oaks arching over the roads. It’s easy to guess that lumber was an important product in Mandarin. Be sure to see the old Wheeler Sawmill and a sugar grinding mill near the front of the park. 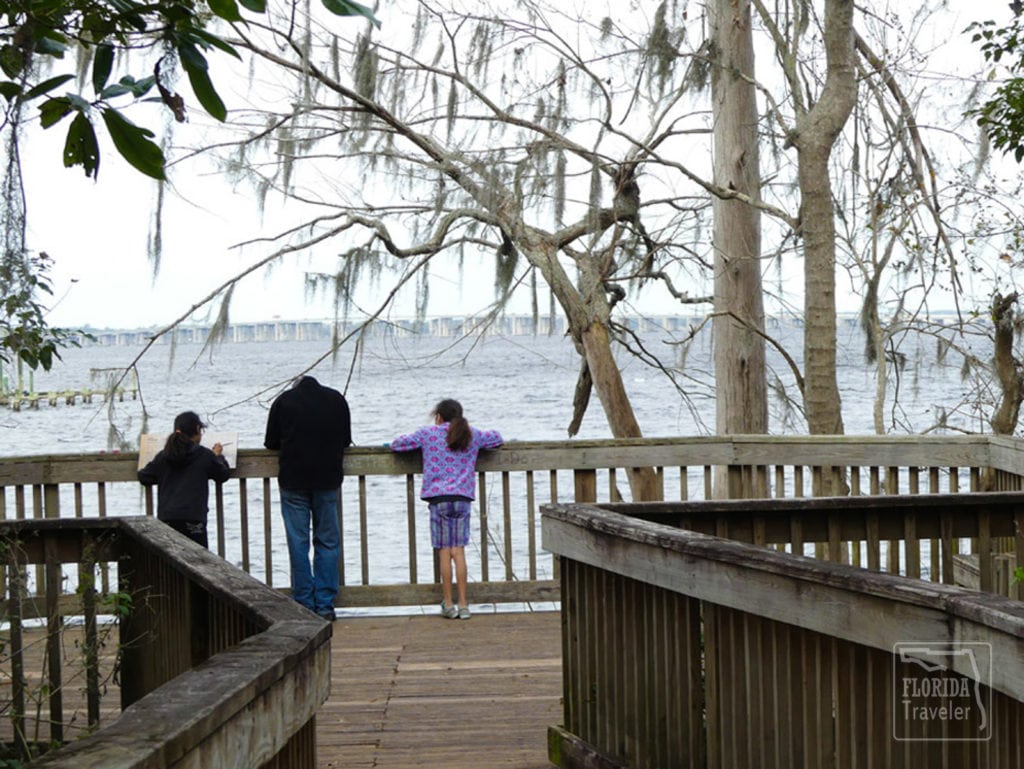 Walter Jones Park is a great place for a picnic under one of its shelters. Even on the hottest days, there’s usually a nice breeze coming off the river. 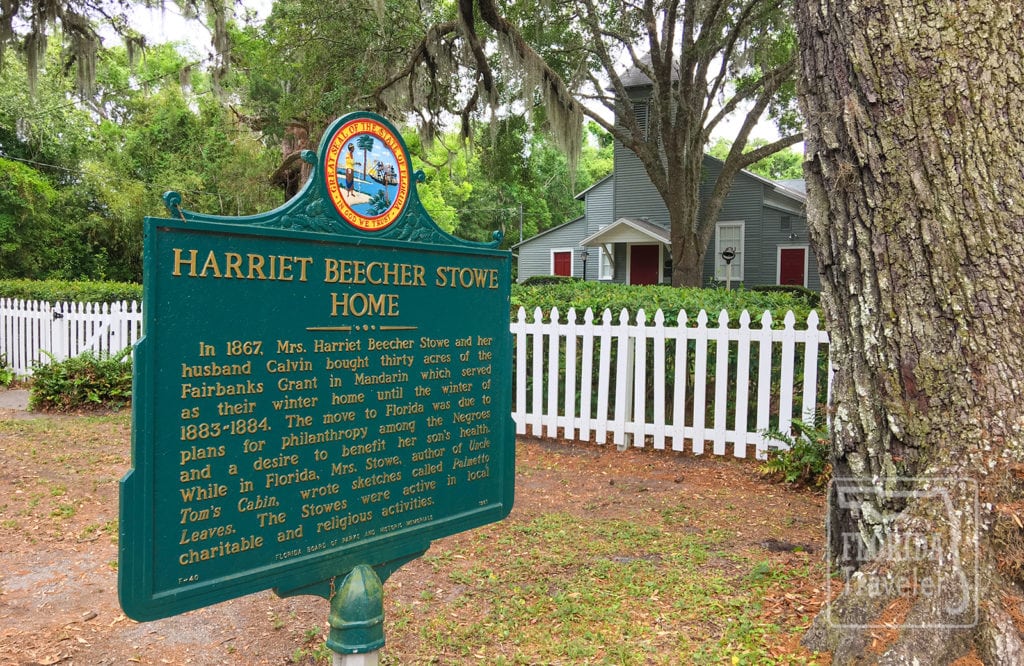 Walter Jones’ story continues just about a mile down Mandarin Road. His general store and the old Mandarin Post office is next door to Mandarin Community Club, another historic treasure. The club was one of Harriet Beecher Stowe’s Mandarin projects. The original building burned and Stowe spearheaded a project to rebuild it in 1872. At the time it was the Mandarin School for Black and white children. Stowe’s winter home was across the street. There’s a marker commemorating her in front of the club. 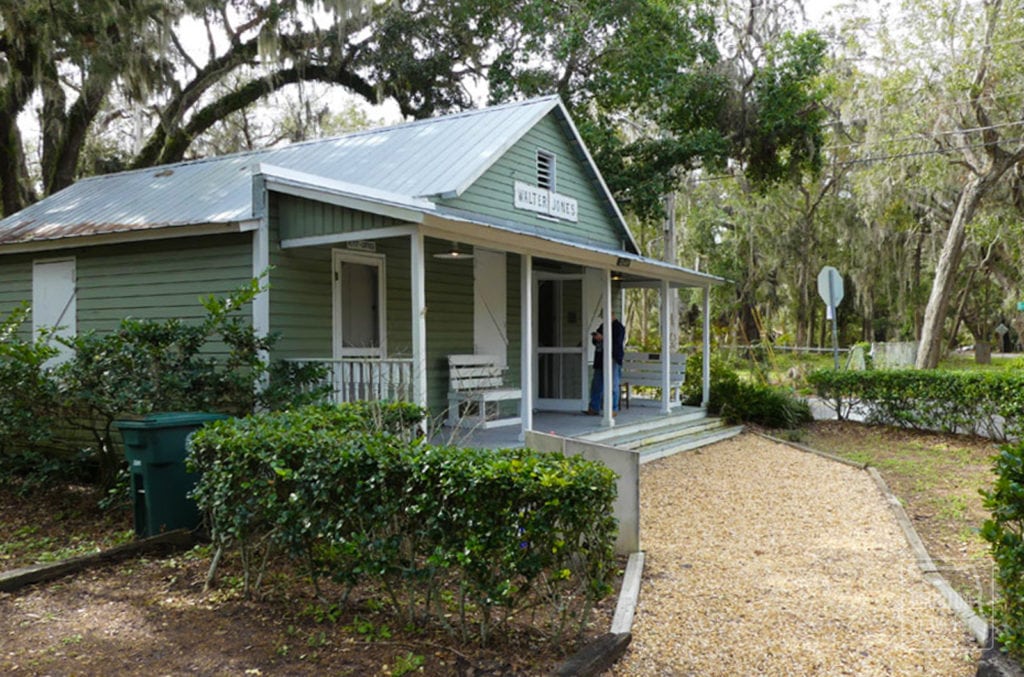 Walter Jones General Store and Post Office was owned and operated by Walter Jones from 1911. When he died, his daughter, Miss Aggie, became the first female postmistress in Florida.
Karen Roumillat greeted us and led us through the store and post office. She told us. “Walter Jones was my great-grandfather and ‘Miss Aggie’ was my great-aunt. I grew up right behind this store and caught the school bus out front. From 1911 until it closed in 1964 it was the local gathering spot.” 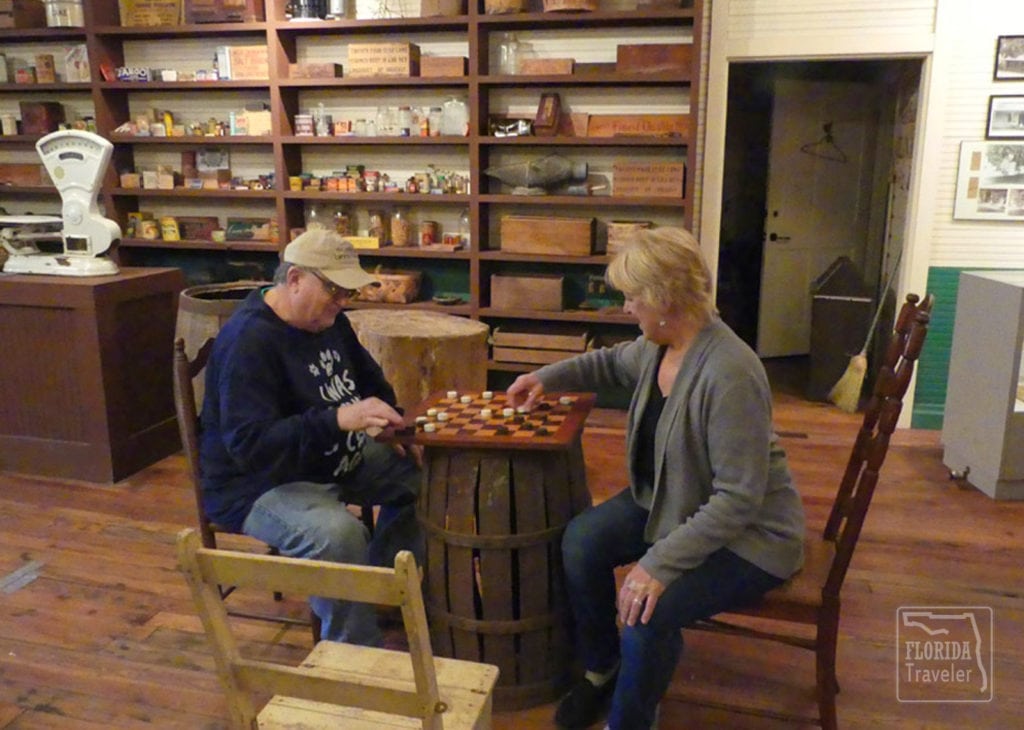 The store sold everything from groceries, to household necessities. It’s a part of a more peaceful era. There’s even a checkers game awaiting players like the “old” fellers who would tell fish stories while they playing checkers in “the good old days.”