BUSHNELL — During the first weekend of January, hundreds gather from around the country to re-create an event that forever changed the face of Florida. It was late December 1835, and the U.S. government planned to begin its Indian removal in just a few days. One hundred and eight soldiers, under the command of Major Francis Dade, had been dispatched from Fort Brooke (near Tampa) to reinforce the troops at Fort King, who were being threatened by Chief Osceola.

After six days of arduous hiking, the soldiers were looking forward to a late Christmas. But on the chilly morning of December 28, just 40 miles short of their goal, they relaxed their guard.  In the scrub forest ahead, 200 Seminole warriors under the command of Chief Jumper crouched beneath the palmettos.

As the troops filed past two abreast, the Seminoles opened fire. Half fell in that first volley, including Major Dade. The remaining troops scrambled for cover and managed to construct a log breastwork, but their efforts were in vain. By the day’s end, only three U.S. soldiers would be left alive.

Historian Frank Laumer described the battle as a watershed in Florida history. The Seminoles “made a terrible mistake” by defeating the U.S. Army in broad daylight, Laumer said. “That was an affront that simply couldn’t be born according to the honor system of the time.”

Laumer is the author of two books on the battle: Massacre and Dade’s Last Command

. Laumer believes that if the Seminoles had not won Dade’s Battle, they might still own the southern half of Florida. “It was considered a pestilential place, full of mosquitoes alligators and Indians. People termed it the most miserable place they ever saw.”

Instead, “Dade’s Massacre” became the first battle of the Second Seminole War. The war would last seven years, cost $40 million (in historic dollars) and take the lives of 1,500 U.S. soldiers. By the war’s end, about 5,000 Indians were sent to the Oklahoma Territory.

Laumer was originally drawn to the story of Dade’s Battle by reading the account of Ransom Clarke, one of only three U.S. soldiers who survived. Clarke suffered a shattered pelvis, a broken arm, a bullet in his lungs, and a severe head wound, but he crawled 60 miles to Fort Brooke in three days. The story sounded incredible to Laumer, so he had Clarke’s body exhumed to verify the wounds.

Those who reenact the event take pride in the authenticity of their clothing as well as their portrayal of the battle. The weekend’s activities include authentic Seminole and U.S. Army encampments, Seminole dances, and native American crafts. 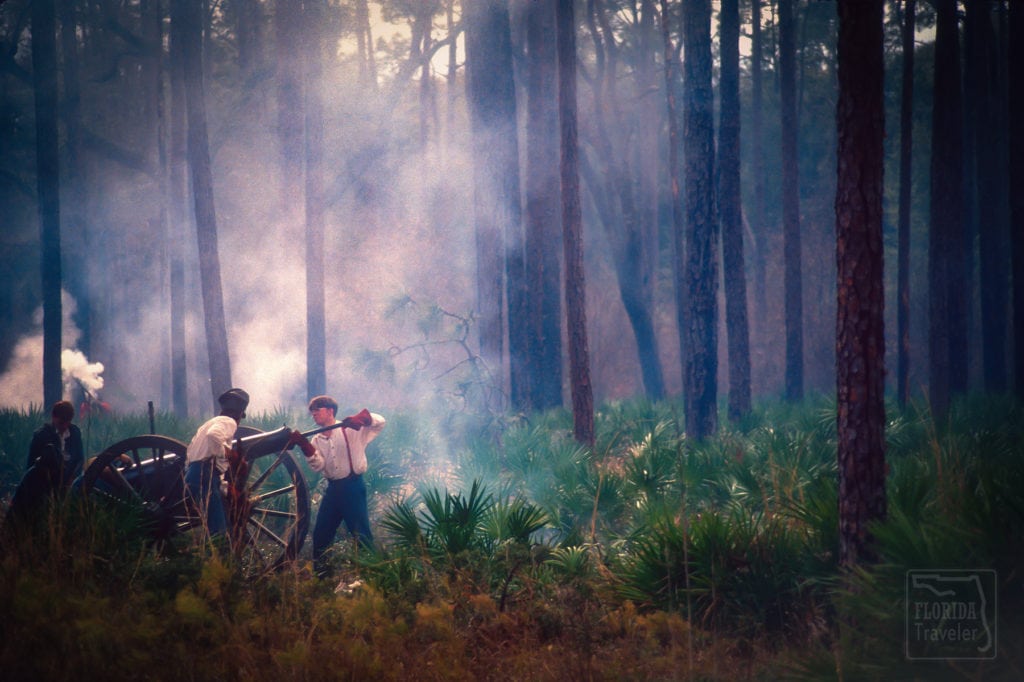 “What we’re wearing is historically documented and accurate 1830s Seminole clothing,” said Earl DeBary of Ocala. He researched his own colorful outfit by studying first-hand accounts of the period.

Morrison said the Seminoles acted, in part, to establish respect. “A lot of people who knew the Seminole said we were timid and cowardly,” he explained.  “Andrew Jackson said you could take an army of 50 women and remove the Indians from Florida.” 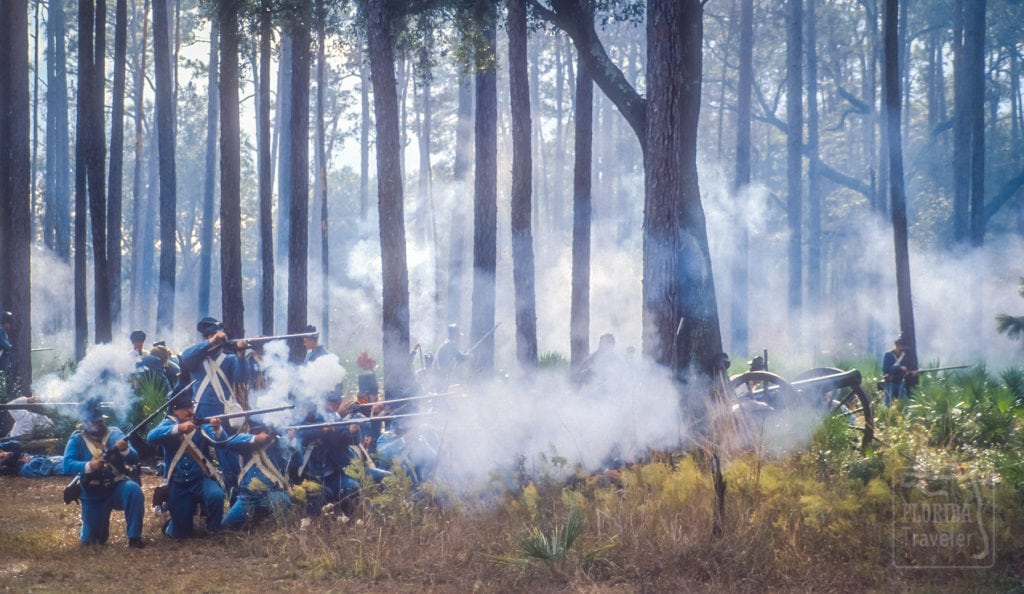 The events of December 28th proved otherwise. “We didn’t lose but two Indians in the battle and seven were wounded,” Morrison said. A third was killed after the battle later in the day.  Morrison says the event honors the people on both sides of the battle: “It’s a great honor [to participate] but there’s also a sadness. Even the Indians sensed that a lot of brave men died that day.”

The Seminoles, he said, “were fighting for Florida–their land–just like Americans have always fought for this land. There’s pride there. And like all wars it’s the good folks on both sides who suffered.” 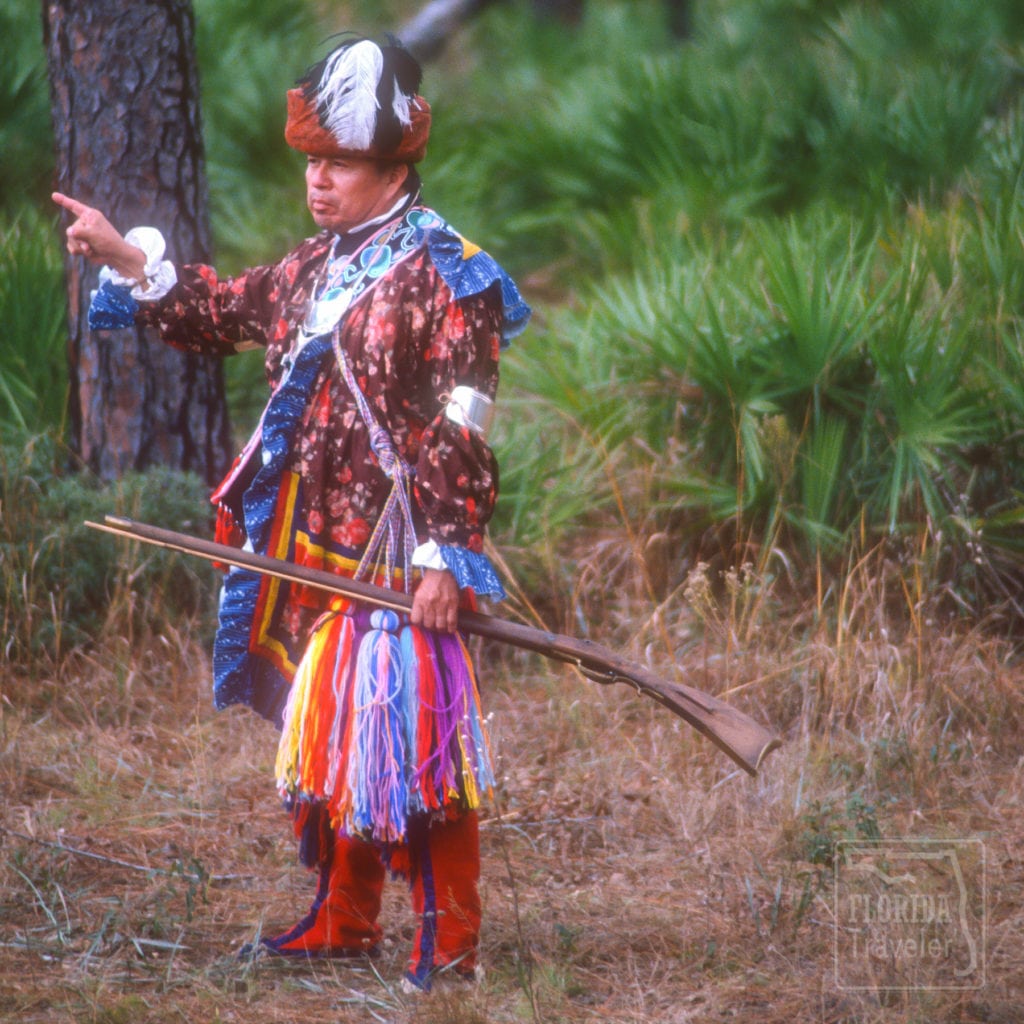 “When people come up and apologize to me I tell them, ‘Wait a minute. What our ancestors did to each other was a long time ago. You didn’t do it. Let’s understand each other and share our culture.’ Seminoles were no different from anybody else, we had good and bad people.”

If You Go: Dade’s Battle Reenactment

When: First weekend in January. The reenactment takes place at 2 p.m. on Saturday and Sunday.

Where: Dade Battlefield State Historic Site near Bushnell. The site is located between I75 and US 301.

NOTE: This article originally appeared in the Ocala Star-Banner.